Awang Karim Abdul Kadir was born in Pulau Jambongan, Sandakan in 1964. His family frequently moved and they eventually settled in Kampung Malubang, Pitas where he spent his childhood and had his early education. He was active in numerous activities such as singing, acting in theatre and writing. He published many poetries, short stories and even gotten involved in the making of drama series and two films. His short story entitled „Misteri Puru Mondou‟ appeared in Wadah, Mei 2018 and was selected as the recipient of Hadiah Sastera Sabah (HSS). In 2008, he published his book entitled “Aki Citra Sebuah Gunung : Kumpulan Drama Awang Karim Kadir”. 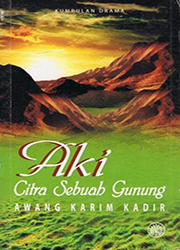