In 1995, a few verses of poem taken from the Bahasa Melayu school workbook were selected to be published in the school magazine. In the following year, Alis Padasian was hoping to produce a novel manuscript "Cinta Kita" after watching a movie of which the title was the same. At the age of 16, her ambition to become a writer was forgotten in hopes of becoming a civil engineer. When she was in the university, her childhood dream of becoming a writer came rushing back after studying Allan Edgar Poe's short story, The Tell - Tale Heart.

Alis Padasian started writing journals, short stories and novella at night and at the end of 2010, she was hired as a reporter for the New Sabah Times. She also experienced writer’s block and decided to quit her job to enjoy life without overwhelming commitment.

SINARUT 1994 is the third novel manuscript that are produced since her return of active writing around 2015, alongside with published and unpublished collection of poems, short stories and novels. 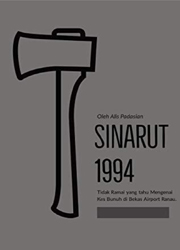